​After having his hands tied by a transfer ban last time out, Frank Lampard is gearing up for his first summer transfer window as Chelsea boss.

Hakim Ziyech has already been snapped up and next on the Blues' shopping list is a new left-back.

A sizable collection of names have been linked with a move to Stamford Bridge over the last month or so, suggesting that Lampard has not yet decided who he wants to bring in.

Good thing 90min is here to help then, eh Frank? Here it is, each of Chelsea's supposed left-back transfer targets ranked in order of their suitability to life in west London. 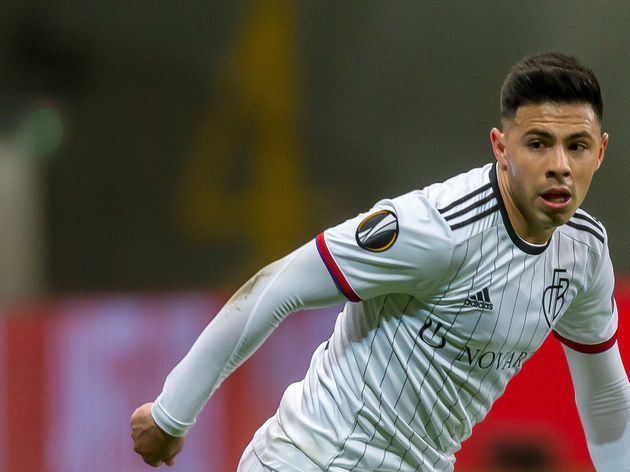 ​Blás Riveros? I'm pretty sure he's one of the starter players on PES 6 Master League? No? He plays for FC Basel? Well then. We stand corrected.

Yes, quite why this 22-year-old Paraguay international has been touted as the answer to Chelsea's left-back conundrum is a mystery.

Perhaps his name was spitballed at a post-midnight meeting of the Stamford Bridge transfer committee as a bit of a joke, and somehow it managed to get out to the press.

Riveros has been in and out of the Basel team all season, making just 19 appearances in all competitions. Definitely one to avoid. ​Next up, Matthew Robert Targett - because nothing says 'I deserve a move to a top six side' more than playing in the worst defence in the Premier League.

​Aston Villa have conceded 56 goals this season and although Targett's performances have not been entirely without merit, he must shoulder some of the blame.

The only thing that just sneaks him above Riveros on this list is the fact that he's English and might be available for a steal if Villa suffer relegation.

However, a discount on a player is little consolation when they're just not very good at playing football. Another bad idea this one. ​He may not be an imposing defender in a physical sense but Marc Cucurella possesses a tactical intelligence that could easily see him enjoy a career at the elite level.

A La Masia product, the 21-year-old started his youth career at Espanyol before being snapped up by ​Barcelona soon after.

After impressing for the B team, Cucurella was sent on loan to Eibar for a season. They then exercised their right to sign the Spaniard... only for Barça to buy him back 16 days later. Weird right?

This season, Cucurella is on loan at La Liga surprise package Getafe, playing in a more advanced left-midfield position for the most part. Could he do it a job at left-back in the ​Premier League? We'll be honest and say, probably not.

Cucurella is an exciting talent but he is not a feasible option for Lampard - yet. ​Last summer it was Harry Maguire and Christian Eriksen. In January it was Bruno Fernandes. This summer, could it be Ben Chilwell who dominates the transfer gossip columns?

​Leices​ter have been a joyous revelation under Brendan Rodgers this season and prior to the break they were within touching distance of securing themselves a place in next season's Champions League.

Don't be fooled into thinking that Ben Chilwell has had a flawless campaign though...

The 23-year-old was terrorised defensively against ​Manchester City, Wolves and ​Liverpool this season and his attacking performances have also been largely ​overstated. Oh to be a young Englishman in the Premier League eh?

Leicester have apparently slapped a £80m price tag on Chilwell. That's too much and as the Maguire saga showed, the Foxes drive a hard bargain and may even have the extra bargaining chip of Champions League football to play with this time around.

Don't get drawn into a summer of drawn out negotiations Frank - he's not worth it. Nicolás Tagliafico represents an all together much safer pair of hands. ​Here he is, Alex Telles. Bask in the glory of the left-back that Frank Lampard should be bringing to Stamford Bridge in the summer.

Now 27, Telles has not followed the most conventional route to the top. Starting his career in Brazil, he earned a move to Galatasaray in 2014 before arriving at Porto in 2016 - via a brief loan spell with ​Inter.

Since then, Telles' has been simmering away nicely, consistently proving himself to be one of the most talented attacking full-backs in world football.

This season has been his