Lyon defeated Serie A leaders Juventus 1-0 in the first-leg of the Champions League round of 16 tie, thanks to a crucial first-half goal from Lucas Tousart.

​Both sides started the game slowly before Lyon forward Karl Toko Ekambi saw his near-post header rattle the bar. The French side were the better team throughout the first-half and it paid off when Tousart tapped in a cut-back from Houssem Aouar.

Ekambi wasted a good chance to double the lead just before half-time, capitalising on Miralem Pjanić's mistake only to blaze over from close-range.

Shocking half from Juventus, even by this season’s standards. Not had a single chance or shot on goal. Painfully slow. Midfield dominated. Rabiot abysmal. Danilo wouldn’t even get a game on England’s beaches, let alone Brazil’s. Only Ronaldo shown any flashes. #LYOJUV

In the second half, Sarri brought on Aaron Ramsey, Gonzalo Higuaín and Federico Bernardeschi in a bid to provide much needed energy and creativity to I Bianconeri. It certainly added intensity to Juve's play as they started to take on more possession of the ball; the hosts defending for their lives for the rest of the game.

Higuaín had the best chance of the night for the away side when he glanced a header wide of Anthony Lopes' post, but the damning statistic of Juventus failing to have a shot on target until the final five minutes of the game that sums up their performance.

In the end, the hosts deserved to win the game against a surprisingly lacklustre Juve, and they will have renewed confidence of springing a surprise heading to Turin. Every chance Lyon created stemmed from good work down the flanks, so it's credit to their planning for exposing what they felt to be a deficiency in Juventus' side. Danilo and Alex Sandro were too often exposed for being too far forward, with the likes of Aouar, Toko Ekambi and Dembélé impressive in feeding the ball forward quickly in transition.

Leo Dubois and Maxwel Cornet also provided impressive support down the wings, with Sandro in particular exposed down the left side - in part because of Cristiano Ronaldo's reluctance to track back and help.

They were able to control the midfield battle, too, with Adrien Rabiot and Rodrigo Bentancur struggling to get a grip of proceedings in central areas. Lyon were impressive on the night, but the quality of their importance was typified by the showing of Houssem Aouar. The young rising star was at the heart of everything for the hosts, demonstrating impressive dribbling skills and fantastic close control.

He capped his performance with a slick assist, setting up Tousart's first half winner.

Houssem Aouar has now provided three assists in each of his Champions League campaigns: Despite impressing at the weekend against SPAL, it was bench duties for Aaron Ramsey once more - as Maurizio Sarri opted to pair Miralem Pjanić up with Rabiot and Bentancur.

Unfortunately, the Italian's selection backfired, as the trio were outclassed throughout the 90 minutes, with Rabiot particularly poor in retaining possession. He wasn't alone, though, with Bentancur's laboured performance failing to provide the spark required to move the ball forward with pace.

Juventus went into Champions League knockout rounds with a weak midfield? Wow. Crazy. Who could have foreseen this.

Pjanić also looked a little off the pace, but the Bosnian was perhaps subdued as he's only just returned to the side from injury. Ramsey's introduction late in the second half came too little, too late - and Juventus now have it all to do in the second leg. 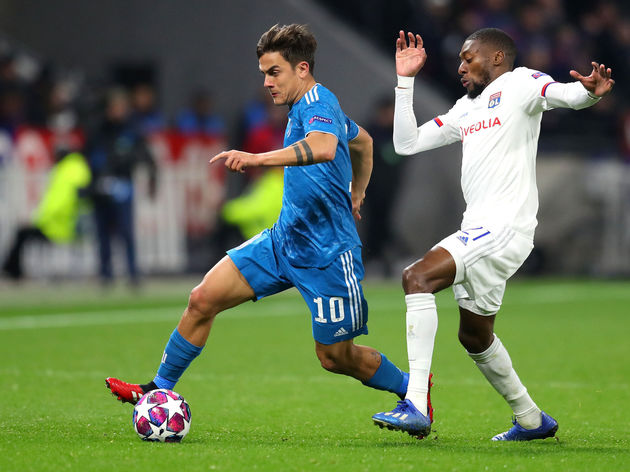 When the away side did start to create chances in the second half, it was Paulo Dybala who looked most likely to play a part.

The Argentine peeled off into space and kept the Lyon defence honest, looking a menacing threat every time he gets on the ball. Cristiano Ronaldo may still be the one that everybody's watching, but Dybala is the player in this side who oozes the most class.

69' | 😱 | SO CLOSE FROM DYBALA! Great play by Juve as La Joya just puts the ball wide by inches!#OLJuve [1-0] #JuveUCL pic.twitter.com/enCUdOtRBs

​Lyon host rivals St-Etienne on Sunday night in the Rhône-Alpes derby, while Juventus host ​Inter in a huge top-of-the-table ​Serie A clash.