Spurs dominated the rest of the first-half, and the visitors did finally take charge of the match in injury time, when Son converted the rebound of his own saved penalty.

Bjorn Engels equalised for the hosts on 53 minutes, powering a Jack Grealish corner into the net with a towering header.

The game seemed to be heading for a draw when Engels allowed the ball to slip under his foot in injury-time and Son raced through to stroke home, snatching a late victory for the visitors.

It was a tale of extremes for Engels and ​Villa on Sunday afternoon. The defender came under scrutiny for almost giving away a spot-kick for handball at the end of the first half, but then outdid himself by bringing down Steven Bergwijn in the box to hand Spurs the lead. 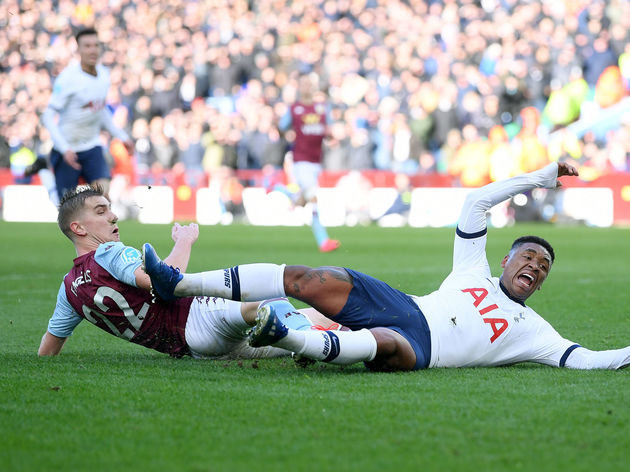 His afternoon looked to be a story of redemption, as his powerful header levelled the scores at 2-2 - but he wasn't finished there.

One momentarily lapse of concentration cost him and his teammates a vital point as he mis-controlled a pass in the dying embers of the game, and Son punished him with a smart finish.

Unlike Robbie Williams, Villa fans will not be loving Engels, instead. Sorry.

Villa's captain really is in a league of his own.

Grealish put in one of the performances of the season during the first half for the hosts, completely bamboozling marker Serge Aurier with his ability to drift inside or power down the wing and cross for his teammates. The 24-year-old produced the moment of the match, sizing up the experienced Alderweireld before effortlessly gliding past him down the outside, working a perfect opening and giving Douglas Luiz the simple task of doubling the lead. It was a miss that Villa were made to rue, but there was little more Grealish could have done for his team on Sunday.

There's something so romantic about Grealish captaining his boyhood team in the Premier League - let's hope both remain in the top flight next season.

It feels a long time ago that José Mourinho was lapping up the praise for helping Dele Alli rediscover his scoring touch.

There's no doubt that the 23-year-old has improved his performances since the Portuguese boss took charge, but his killer instinct has left him once more. Alli was guilty of missing three gilt-edged opportunities in the first half, first planting a free header wide, then skewing a one-on-one chance wide of the far post, and finally side-footing a simple finish into a defender with the goal gaping.

His fluffed lines were costly for ​Spurs, who should have been out of sight by half-time, but ultimately were pegged back by their determined hosts. The midfielder was gifted the opportunity to make up for his shortcomings with another one-on-one in the second half, but Pepe Reina stood firm and Alli was left to rue another poor finish.

Goals win matches, and Alli must recapture that clinical streak.

What a signing this guy could prove to be. Bergwijn has hit the ground running since his move from PSV Eindhoven, and following his debut goal against Manchester City the Dutchman put in another stellar performance.

The 22-year-old was unfortunate not to bag his second goal for Spurs when a first-half effort was blocked on the line, but he made his mark by winning the penalty which handed the visitors the lead.

Bergwijn constantly terrorised the Villa backline with his stunning speed, and his linkup play with Lucas Moura and Son made for terrific viewing.

The trio constantly looked to hit their opposition on the break with neat and intricate passing, and although Son will grab the headlines for his late winner, Bergwijn was the key to Spurs' attacking trident.

Spurs will recommence their Champions League duties on Wednesday evening, when Mourinho's side host RB Leipzig in the round of 16.