​Paris Saint-Germain have overtaken ​Manchester City as the most financially powerful club in world football while ​Manchester United have dropped to an all-time low position of 16th on the table.

The annual ​Soccerex Football Finance 100 report rates clubs a football finance index score, based on the value of the current squad, tangible assets, finance available in their accounts and potential owner investment and net debt.

PSG overtook City in top spot after reducing their debt by £58.2m, while City's debt levels had increased by around £74.8m over the same year. ​Bayern Munich claimed third place, with ​Tottenham ahead of ​Real Madrid in fourth and ​Arsenal, ​Chelsea, and ​Liverpool sitting sixth, seventh and eighth in the standings respectively. 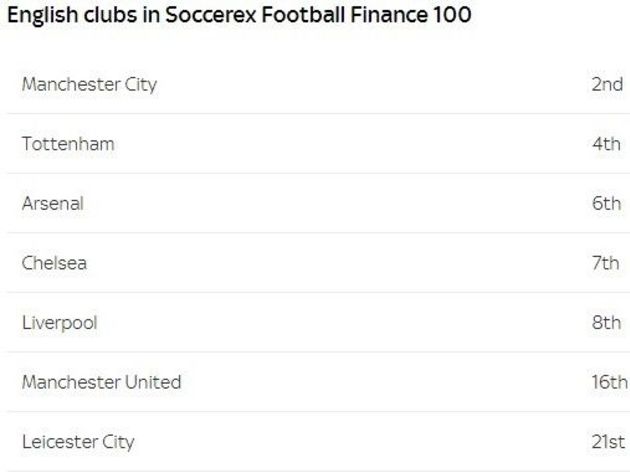 United fell eight places from last year to 16th in the report, mainly due to the depreciation in squad value and an increase in cash debt.

Europe's elite sides accounted for 80% of the top 30 but almost half of those clubs are owned by non-European entities, including organisations and individuals from the Middle East, North American, and Southeast Asia, the report said.

The ​Premier League is represented by 18 clubs in the top 100, while Major League Soccer (MLS) was the next best with 17.