Southampton scored late to earn themselves a replay against Tottenham in the FA Cup, with the game finishing 1-1 at St Mary's on Saturday.

The hosts started brightly, but it was Spurs who had the first notable opportunity. Dele Alli set up Son Heung-min, but he was unable to find the target. The Saints continued to push forward, however, with the away side struggling to retain possession.

The north London side thought they had moved into the lead midway through the first half when Giovani Lo Celso's strike from the edge of the area found the bottom corner, but it was ruled out by VAR after an offside Son interfered with play. Lucas Moura should have opened the scoring moments later, but he failed to hit the target.

FULL-TIME: A late equaliser for the hosts means the tie will need to be decided by a replay at Tottenham Hotspur Stadium.

Southampton came close to opening the scoring just before the break, but Japhet Tanganga was able to clear the ball off the line with a powerful header. The Saints were inches away from taking a 1-0 lead at the start of the second half, Danny Ings' flick clipping the post on its way out.

However, Spurs took the lead just before the hour mark, Son finding the bottom corner from Erik Lamela's pass. The hosts continued to push forward and and were rewarded for their positivity as they found an equaliser through Sofiane Boufal three minutes before time.

Here's 90min's review of the game.

Southampton came into this clash having won four out of their last five matches in all competitions, with one of these wins coming against Spurs. From the off, it was clear to see their confidence, each player looking to press and harry the opposition player into a mistake. It worked. They looked menacing every time they went forward, with midfielders and attackers picking up clever pockets of space, which Spurs couldn't deal with. However,

Once Spurs took the lead, the hosts began to struggle to create opportunities. However, they never gave up and found an equaliser in the closing stages. Another impressive performance and they now face another tussle with Spurs.

Bright start once again. We’ve been on the front foot mostly, keep it up ⚪️#SaintsFC #SOUTOT #FACup pic.twitter.com/Bwl4ZdXxvo

Redmond caused trouble all afternoon, picking up the ball in different areas of the pitch before looking up and either playing a piercing and penetrating pass, or driving forwards with pace towards the heart of the Spurs defence.

The Southampton winger was linking up expertly with Ings and on another day, he could have had two or three assists during the clash. Perhaps the best thing about his performance was that he never stopped tracking back out of possession and continued to probe throughout the game when on the ball.

Danso looks like the weak link in the team. Redmond on the other hand is looking very lively. #SOUTOT #SaintsFC

Jose Mourinho opted to field a very strong starting lineup, with the likes of Hugo Lloris, Harry Winks, Dele Alli, and Son all starting the game. New signing Gedson Fernandes was also handed his first start for the club in a statement of intent from Mourinho. Although Spurs had the best chance in the opening exchanges, they were struggling to keep hold of the ball. They grew into the contest and Mourinho will have been frustrated that his side didn't take one of their many chances in the first half. However, equally, while they looked bright going forward, they were carved open time and time again by the Saints.

It took a moment of magic to finally break the deadlock, but once again, they failed to hold on to their lead and were pegged back. No clean sheet once more and instead, they now have another match to add to their schedule.

Liking the look of us going forward, not so sure about going backwards though #COYS #THFC #SOUTOT

Lo Celso may have taken a while to adjust to the pace of English football, but he is now showing what an outstanding player he is - and on a regular basis. 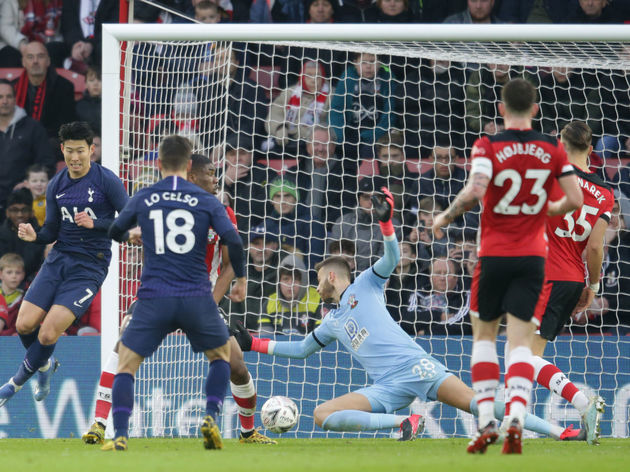 The Argentine intelligently found areas between the Saints' defence and midfield to work in, constantly picking up the ball and thinking positively. While Mourinho's men may have lacked an end product on occasion, Lo Celso kept supplying the forwards with opportunities to get in behind.

His display can be summed up by his contribution for the goal. As he received the ball, he turned and drove through the centre of the pitch, gliding past players before feeding Lamela, who played it through to Son to score. Another impressive display.

That was ALL ABOUT Lo Celso! What a player! And let’s hope that means Son’s found his shooting boots! #FACup #SOUTOT #THFC #COYS pic.twitter.com/MPDyYk5a1h

Lo celso is a wonderful player . Amazing in dribbling and distrebuting the ball.#SOUTOT

Southampton travel to take on Liverpool on Saturday before hosting Burnley on 15 February, bidding to any lingering relegation fears in the rearview mirror.

Tottenham, meanwhile, return to Premier League action on Sunday as they host Manchester City. They then travel to take on Aston Villa in two weeks time.