An Ellen White brace saw Manchester City edge past Manchester United in the Women's FA Cup, as Nick Cushing's side survived a late United onslaught to hold onto a 3-2 win.

United should have opened the scoring in the first half when Jess Sigsworth pounced on a loose ball from Ellie Roebuck, but her goal bound shot was headed clear by Gemma Bonner.

Although City had looked edgy building from the back, it was United who were made to pay for a defensive lapse. Former City defender Abbie McManus' weak back pass was gobbled up by Ellen White, who delicately clipped the ball over Mary Earps to give the visitor's the lead.

FULL-TIME | We fought hard and held on! A cup tie and Manchester Derby that had absolutely everything!

United ensured a nervy last five minutes for City, as Zelem's dangerous corner came off Hemp's head as she attempted to clear. Despite heavy late pressure from the hosts, City hung on. It was a very reactive performance from United in the first half, as they failed to create any opportunities from their own build up play; their chances came when they pressed City high up the pitch. However, United lacked cutting edge and could not take advantage of the multiple errors City made at the back.

United are normally so dangerous out wide, but Sigsworth and Kirsty Hanson never got at the City fullbacks. With Georgia Stanway in an unfamiliar right back role, there was an opportunity for United to take advantage of a potential defensive vulnerability. However, United rarely tested her. The introduction of Lauren James really sparked United into life, as Casey Stoney's side put in a much better second half display, but left themselves too much to do.

You can see United are building something, but they need that game changing striker. United made one error and Ellen White punished it, City have made plenty but haven’t capitalised. Lauren James might be the most exciting thing in the NWSL now. And she’s only 18!!!! What a diamond Man Utd have amongst them

Why didn't Lauren James start this game or at least start the second half. She would have terrorised that City defence endlessly. City's looked really edgy playing out from the back and were fortunate United did not make them pay. They cannot afford to be so generous at the back when they come up against Arsenal next week, who will surely punish such sloppiness.

But going forward, City were everything United were not. While the hosts were wasteful, Ellen White was clinical. While Hanson and Sigsworth were relatively quiet out wide, Hemp was a menace down the left. The England winger's delivery for White's crucial second goal was perfect. 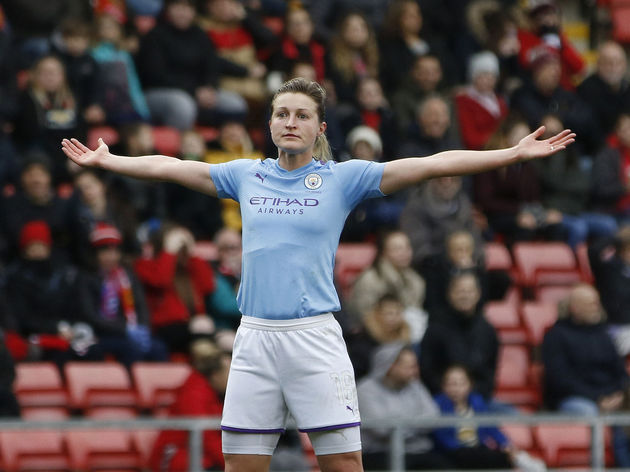 White's natural goal scoring ability proved the difference between the two teams. Her finish for City's first was cool and composed, while her second goal demonstrated her striker's instinct and supreme movement. She then showed great awareness to set up Scott for the third.

As ever, White was tireless up front, but it was her clinical edge in front of goal that was decisive. Selecting White to lead the line over top scorer Pauline Bremer was a big call from Cushing, but White repaid her manager's faith.

Ellen White is the difference in the 3rd Manchester derby. City up by 2 goals. United have had their moments but have been unable to capitalise. #WomensFACup

Both sides are back in cup action in midweek, with their attentions turning to the semi finals of the Continental Cup. Man Utd host host league title favourites Chelsea, while holders Man City face back to back fixtures against ​league champions Arsenal.

The Citizens travel to Borehamwood on Wednesday, before hosting the Gunners the following Sunday in Nick Cushing's final game in charge.