​It's a scoreline which will make onlookers think Bayern Munich had it all their own way against Hertha BSC, but a 4-0 win for Hansi Flick's side was only made possible after a frustrating first 45 minutes.

Bayern Munich dominated possession throughout the match, but for the most part the Rekordmeister struggled to create too much in the final third of the pitch - with rare shots at goal hardly testing Rune Jarstein in between the sticks.

Thomas Müller was able to break the deadlock with a smart finish, while Robert Lewandowski proved his worth with his 31st goal across all competitions this season to double Bayern Munich's lead at the Olympiastadion. Ivan Perišić scored Bayern Munich's fourth and final goal, but it was the club's third goalscorer Thiago Alcântara who once again showed why he might just be the Bavarian's only irreplaceable player.

The former Barcelona midfielder is well known for his technical ability and is often thought about as more of a natural playmaker, both in style and positionally, but in actual fact Thiago often acts as Bayern Munich's only defensive midfielder.

The 28-year-old is, of course, able to get away with a diminished responsibility when it comes to defending thanks to Bayern Munich's control in almost every match, but Thiago's contributions at the back are still wildly underestimated.

Thiago is one of the club's most physical players and is able to win back possession like any seasoned defensive midfielder, often without actually having to commit any flying tackles thanks to the way he uses his body.

But it's on the ball from a deeper position where Thiago really shines through.

The midfielder is involved in every transition from defence into attack at Bayern Munich, dropping deep to pick up the ball before feeding the ball out wide, with both Benjamin Pavard and Alphonso Davies offering the club a dangerous outlet.

When space out wide is closed off, Thiago is able to nonchalantly thread passes through the opposition lines where Lewandowski can bring his teammates into play, or in behind a back-four where the likes of Serge Gnabry or Perišić make diagonal runs to get through on goal.

It's easy to point to Lewandowski's goals this season as the most crucial part to Bayern Munich results, and it's true that the Poland international has been carrying the Rekordmeister throughout the campaign - even against Hertha, it was his goal that settled any nerves. 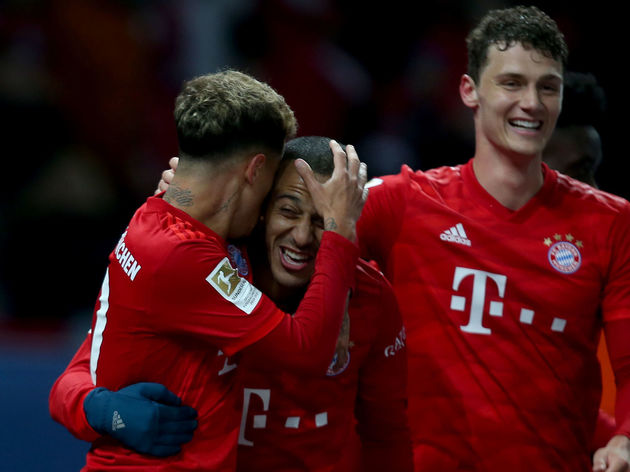 While Thiago's importance might not be felt in most of Bayern Munich's games as they've naturally got a better squad of players, the 28-year-old will be the difference maker if they want to claw their way back in the Bundesliga title race, let alone making a splash in the latter stages of the Champions League.