The FA Cup, eh? Cliches about the 'romance of the cup' aside, there's something chaotically brilliant about the early rounds. There's a randomness to the match-ups you rarely see in football; a certain wildcard factor that all the money in the Premier League can't buy.

It scarcely fails to deliver, and though the third round is yet to be fully complete with a few bits and pieces still outstanding, Saturday and Sunday yielded plenty of entertainment, nd even more talking points.

Distilling seven highlights from 63 games was no easy task; but we've done our best.

Youngster Luke Matheson sets up veteran Aaron Wilbraham and @officiallydale are back in the game!#EmiratesFACup pic.twitter.com/RXkxVuFJPw

With just one win in 16 away from home, the writing was on the wall heading into Rochdale's clash with ​Newcastle, but it all looked to be going to plan even for an injury-ravaged Magpies, who led from the 17th minute through Miguel Almiron - whose transfer fee could have paid for the entire Rochdale team as many times as you'd like.

But while we've heard all weekend about things you'll only see in the FA Cup, it truly is only in England's famous cup competition that you'll see a 40-year-old emerge from the bench and bloody the nose of a team a solid two divisions above his side in the football pyramid.

It was a moment that Aaron Wilbraham - who has now scored in 19 of the 20 years this decade - will likely tell the grandkids about...when he gets back from training on Monday. 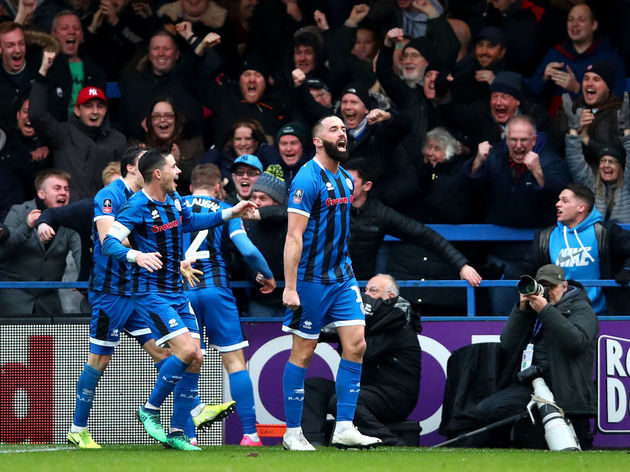 Another stunner at Loftus Road 勞

Having your own goal of the round competition, @QPR?  pic.twitter.com/6b3xxkFyx8

The third round was fruitful for Mark Warburton and QPR, who put Swansea City to the sword with a clinical 5-1 victory. It was a goal of the round competition in itself, in truth, but the pick of them came through midfielder Josh Scowen late on.

Taking it down on the right of the area after some neat build-up play, it looked as if there was absolutely nothing on as the number 11 went away from goal. But to hell with it, you're 4-1 up with seconds remaining - have a go. And have a go he did.

With literally nothing to aim at, he angled an effort that defied all known laws of physics and geometry as it dipped into Kristoffer Nordfeldt's far corner, and put the shine on a tremendous 'R's victory. It's the 90th minute, you're leading 2-1, and the opposition goalkeeper comes up for a set-piece. It gets dealt with, falls to you on the edge of the area, and you're left with a clear sight of the opposing goal 80 yards away.

With half a mind on clearing it and half a mind on glory, you carefully send the ball up the park and it looks for all the world as if you've managed it. It doesn't have too much on it, but it looks as if it has enough to beat the defender and cross the line.

But then your midfielder catches up with it and clumsily thumps it home from close range 'to make sure.' Barnsley's Mads Juel Andersen surely had words with teammate Luke Thomas after his side's 3-1 win at Crewe for this one.

What a double save from McGovern! He showed great reflexes to save a volley from Bodin before getting up to deny Bayliss' rebound!

After he'd saved once from Billy Bodin, the ball fell to Tom Bayliss as the Lillywhites searched desperately for a third goal that would set up a nervy finish for the visitors.

It subsequently came right back at McGovern from impossibly close range, but even though he saw it late, he reacted like lightning to push the ball away and keep the lead comfortable. With 35 minutes on the clock, Tranmere Rovers might have wanted to call their visit to Watford off early. They were 3-0 down thanks to a clinical display from the home side, goals from Tom Dele-Bashiru, Nathaniel Chalobah and Troy Deeney putting them on the verge of elimination.

It must have been the half-time team talk to end all half-time team talks from Micky Mellon at the break, however, as the League One side brought themselves back from the dead. Connor Jennings and Emmanuel Monthe put them on the verge with 12 minutes remaining, before the Hornets' Mason Barrett had a moment to forget, sliding in clumsily on Corey Blackett-Taylor in the area.

The youngster initially got away with it, before VAR intervened to award the penalty after all, which Paul Mullin converted emphatically to send a sizeable travelling support into delirium. It wasn't a good day for Tottenham, who laboured to a 1-1 draw with Championship strugglers Middlesbrough as José Mourinho's indifferent start in the hotseat continues, but they had one thing to celebrate, as Lucas Moura headed in a terrific cross from Serge Aurier to cancel out Ashley Fletcher's opener.

The Ivorian right-back, who has had his critics this season, took the ball in space on the right, slowed his run and dinked a delicate, floated cross that drifted with gentle precision onto the head of the Brazilian, who would have done very well to miss at the back post.

A replay in north London beckons for this one. OK, there were better goals - just - than Curtis Jones' wonder-strike that sent a ​Liverpool reserve team past Everton into the fourth round. None of them, however, carried the importance of the goal that determined the 25th FA Cup Merseyside derby.

The confidence and the borderline-offensive audacity of the 18-year-old to even try and score from the distance and angle he did, at the business end of his biggest appearance yet as a Liverpool player, deserved to win the tie, and so it did.

If he wasn't already there, the goal also put him on the map as the next emerging star to graduate from the academy into the first-team set-up. He's going to be a huge player for the Reds in the years to come, once the days of James Milner, Jordan Henderson and Georginio Wijnaldum begin to wind down.