It's a clash of two promoted sides this weekend as Sheffield United welcome Aston Villa to Bramall Lane in the Premier League.

Chris Wilder's men come into Saturday's game after recovering from a goal down to win 2-1 away at Norwich last time out, courtesy of goals from Enda Stevens and George Baldock. The two strikes in three second half minutes completed the turnaround at Carrow Road, and left the Blades just one point shy of ​Manchester United, who sit fifth in the table. Wilder's side have taken the top flight by storm in their first season back in the big time, but the same can't be said for the visitors.​

​Villa, last season's Championship play-off winners, have lost two on the bounce in the league and are only out of the relegation zone on goal difference. Their most recent defeat came in a 4-1 drubbing at home to Midlands rivals ​Leicester City. Boss Dean Smith will be looking for a reaction this weekend.

Blades hotshot Lys Mousset was forced off in the win against Norwich, but boss Wilder is confident he will be fit in time for Saturday's game.

Aside from that slight concern, ​Sheffield United have a full complement of players to choose from ahead of the visit of the Villans. As for the Midlanders, Smith saw Tyrone Mings limp off with a hamstring injury during the Leicester defeat and the England defender is expected to miss the busy festive period.

Matt Targett is a doubt ahead of the trip up north - he too was a casualty from Sunday's game with the Foxes and faces a late fitness test. Elsewhere, goalkeeper Jed Steer is continuing his recovery from a calf injury sustained against ​Wolves in November and striker Keinan Davis is unlikely to make the match day squad.

The Blades have never beaten Saturday’s opponents in the Premier League – losing on five occasions and drawing once – while winning just one of their previous five home league matches in this fixture. That victory came in the Championship last term, though.

Villa would be advised to keep Lys Mousset in check, as he has hit the net with each of his five efforts on target. But fellow striker David McGoldrick is yet to score from his 28 attempts. Aston Villa rule the roost in this particular fixture, coming out on top on 63 occasions compared to Sheffield United's 39.

However, in the sides' last meeting, the points were shared in an epic 3-3 draw at Villa Park in the ​Championship in February.

It wasn't until the 82nd minute that Mings grabbed a goal back, then Tammy Abraham netted before Andre Green headed a dramatic 94th-minute equaliser.

Aside from their shock 2-0 defeat to ​Newcastle in their last home game, the Blades have been flying in the ​Premier League recently.

Before that blip against the Geordies, Wilder's men had gone seven unbeaten in the league - a memorable 3-3 draw at home to Manchester United part of that run. 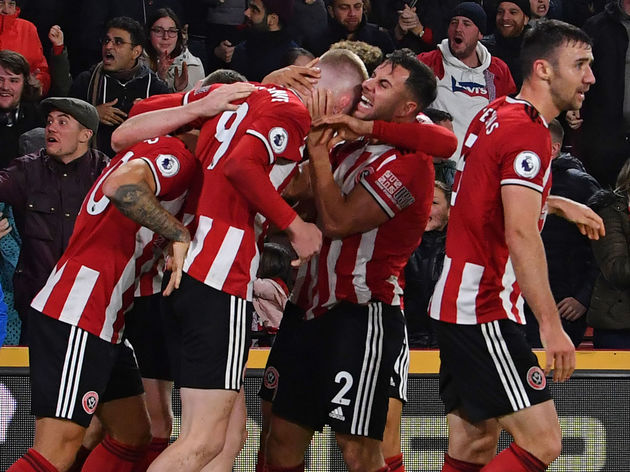 The Blades have performed well at Bramall Lane so far this season and taken points off some of the league's big hitters. They even claimed the scalp of ​Arsenal earlier in the campaign.

As for the visitors, they lost their last game to ​Chelsea on the road, but prior to that defeat performed admirably at Old Trafford and came away with a point.

However, the table doesn't lie. Smith's side have only mustered four wins all season and have been on the losing side no fewer than nine occasions. They have only won one in their last seven league games, although that did come in a 5-1 demolition away to Norwich, the other promoted side in the league.

Here's how the two teams have got on in their last five games.

Sheffield United produced a stirring comeback in their most recent Premier League encounter to claim all three points, and another win looks on the cards here. Villa's thumping win at Carrow Road in October was impressive but was also their only win away from home all season.