​One of the greatest legends in ​FC Barcelona's history, midfield maestro ​Xavi Hernandez was something special.

And now, a scouting report on the midfielder from when he was just 14 gives proof of how highly he was rated by Barcelona coaches.

Xavi enrolled in to the Barcelona academy when he was 11-years-old and stayed at the club for a total of two decades.

He became one of the modern day legends on the game and is an example to young footballers who want to grow at their respective clubs from their academy setups.

As part of Cristian Martin's book '​La Masia: Developing people beyond sport', the aforementioned scouting report on Xavi is published in full as revealed by ​Marca. 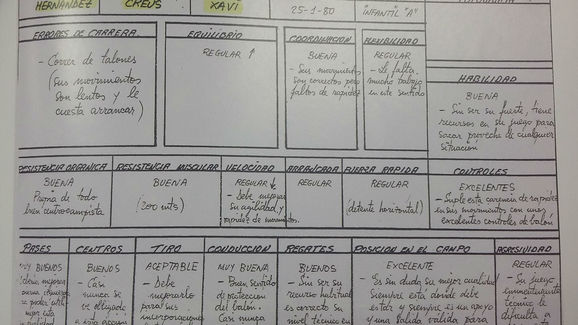 Below are the translated details of the categories mentioned in the above report by Barcelona scouts:

Running: He runs on his heels, his movements are slow and he has trouble picking up speed.

Coordination: Good. His movements are correct, but lack speed.

Flexibility: Average. He needs a lot of work in this regard.

Skill: Good, without it being his forte. He has the resources in his game to take advantage of any situation.

Fitness: Good. He has everything a good midfielder should.

Speed: Average. He has to improve his agility and speed of movement.

Control: Excellent. He offsets his lack of speed in movement with exceptional ball control.

Passing: Very good. He should improve with his left foot, but this is his great strength on the pitch.

Crossing: Good. He is almost never forced into this action.

Shooting: Acceptable. He should improve this for when he gets forward in attack, like Guardiola.

Running: Very good. He has a good sense of protecting the ball, he almost never loses it.

Dribbling: Good. Without being his best asset, his technical level is impressive.

Positioning: Excellent. It is undoubtedly his best quality. He is always where he should be and always offers support and an option for teammates.

'It Was a Promise' - Miss BumBum Suzy Cortez On Why She Got a Tattoo of Lionel Messi in Groin Area
3 Players That New Barcelona Manager Quique Setien Could Sell in the Transfer Window
Cristiano Ronaldo is No.1: Juventus Star Has Scored Against Every Team He Has Faced in the Serie A
5 Reasons Why Real Madrid is a Winning Machine Under Zinedine Zidane
5 Things Quique Setien Needs to Fix Immediately at Barcelona