VARcicle: Analysing Every Refereeing Decision Made on Matchday 9 of the Premier League

​Just like across Europe over the last two years, the introduction of a Video Assistant Referee (VAR) in the Premier League this season hasn't gone down too well for fans either in the stadium or at home.

But while there have only been one or two incidents on any given weekend so far, matchday nine's first eight games produced a host of controversial moments that left supporters scratching their heads on Saturday.

So along with 90min's verdict on if the decision made by the VAR was correct or not, here's a closer look at all the big decisions which were decided by technology so far this weekend. Perhaps one of the hardest decisions of the weekend, Chris Wood's late equaliser against Leicester City was chalked off after it was deemed that the striker had tripped Jonny Evans before the ball crossed the line.

While replays certainly showed that Evans was clipped ever so slightly, Wood's eyes remained firmly on the ball and certainly wasn't guilty of committing a foul.

It's probably time for the FA to clear up what exactly a free-kick or penalty is given for - either someone committing a foul or someone getting fouled - to help clear up any more confusion which could come about from decisions like this.

Perhaps more worrying was that the referee, Jon Moss, didn't go to review the decision himself, instead taking the VAR's decision on what was clearly a subjective decision. VAR: No penalty (no foul)

If we're taking Wood's disallowed goal against Leicester as the level which the VAR intervenes for contact inside the area, then how Gerard Deulofeu wasn't rewarded with a penalty against Tottenham becomes all the more confusing.

After finding his way into the area, the Watford forward up - something that was missed by referee Chris Kavanagh, who in his defence could have been unsighted. VAR: No penalty (no foul)

Football is a contact sport. Players can use a hand to help judge the distance from another player, they're still allowed to tussle with one another and shoulder barges are often cheered louder than goals at some grounds.

But there's very little doubt that coming in from behind an attacking player, putting both hands on their torso and pulling them down to the ground is certainly a foul.

That, however, wasn't the case at Selhurst Park when Wilfried Zaha dragged Kevin De Bruyne down inside the penalty area.

While that decision didn't have an impact on the final score, Pep Guardiola certainly let his feelings be known after game where he was seething with the decision from the Video Assistant Referee. While the introduction of a Video Assistant Referee hasn't helped clear things up when it comes to subjective decisions, the Premier League's new technology has all-but eradicated any chance of a team scoring from an offside position.

And that was the case of Saturday when There were very few protests when Dele Alli netted a late equaliser against Watford on Saturday, capitalising on a mix up between Ben Foster and 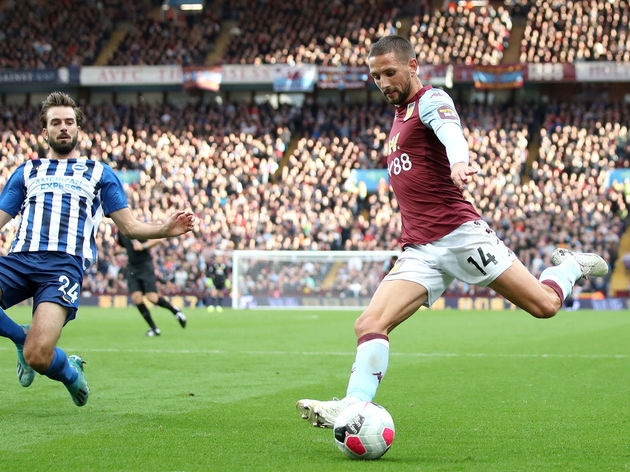 Any decisions in a match between Aston Villa and Brighton will hardly get any top-level media coverage, especially considering the hosts still picked up three points even after having the VAR work against them.

While both sides were waiting for an opener, Conor Hourihane appeared to beak the deadlock with a stunning strike from the edge of the box after goalkeeper Mat Ryan fumbled a looping cross.

Ryan was under pressure from Wesley when he went for the ball and although there was very little in it at all - Brighton's goalkeeper largely got himself into trouble by misjudging the flight of the ball - the VAR still ruled out Hourihane's effort.

It's been chalked up as a pretty clear example of goalkeepers being too protected by officials, but in reality, it was an awful decision which could have cost Villa an important result in their hopes of avoiding relegation.