6 Must-Watch Games From Around Europe This Weekend

Domestic football is finally back after the international break.​

While it’s great to see Harry Kane and Raheem Sterling net for the Three Lions on a Monday evening in Sofia, the weekend is not quite the weekend without a proper array of domestic football from across Europe’s top leagues.

Thankfully though, the Bundesliga, La Liga, Serie A and the Premier League are all back this weekend and there are some absolute cracking contests to look forward to.

Check out the six games below that you will not want to miss. VfL Wolfsburg have made a brilliant start to the season; they are the only Bundesliga side still unbeaten, they’ve conceded just four league goals, they have the best defensive record in the league and they recorded back to back wins against Union Berlin and Mainz 05 before the international break.

This means that Wolfsburg currently sit second in the Bundesliga on 15 points and will travel to the Red Bull Arena to face RB Leipzig in confident mood on Saturday.

After a strong start, Leipzig have won just once in their last four games and were thrashed at home by Schalke 04 in their last home game back in September. However, they are still currently fifth and just one point behind their opponents, meaning if they perform to the levels they are capable of it should be a close encounter on Saturday.

In ​La Liga, third placed Atlético host a revitalised Valencia side on Saturday afternoon knowing a win would at least temporarily draw them level with bitter city rivals Real Madrid - who don’t play until the evening - on 18 points.

After a slumbering start to the season, Valencia have started to find their mojo in recent weeks as they backed up a brilliant 1-0 win away at Athletic Bilbao with a hard-fought home victory against Alaves leaving them in form and heading in the right direction in La Liga.

With Atlético water-tight at the back, boosting the best defensive record in the league, Valencia will have to hope the likes of Maxi Gomez and Denis Cheryshev can provide the spark in attack to break through the resolute backline of Atléti. Attention turns to the ​Premier League on Saturday evening and what is already a must-win match for Manchester City as they aim to keep their title hopes alive. In some people’s eyes, City’s disastrous defeat at home to Wolves last time out means they are out of the title race already, with Liverpool now eight points clear at the top.

However, this City side are special. They have collected a staggering 198 points over the last two seasons and while manager Pep Guardiola will be worried, he will know his side are capable of catching Liverpool as there are still 30 league games to go.

A trip to Selhurst Park to face a Crystal Palace side who are unbeaten at home and sixth in the Premier League on 14 points, just two fewer than City, will pose another really difficult challenge though. The pressure will be on in what should be a cracker in south London under the floodlights. 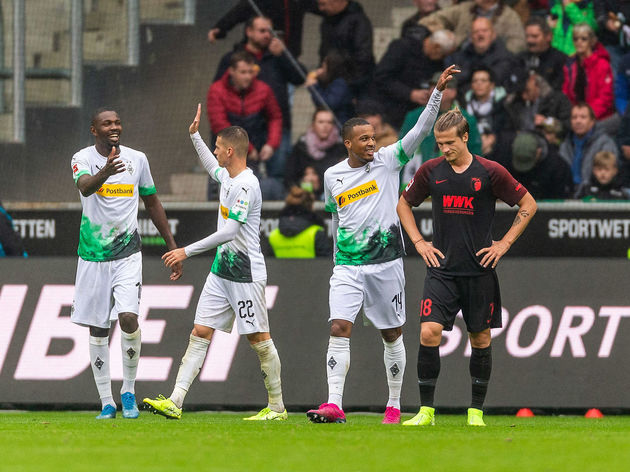 Back to Germany and the final game on an enthralling Saturday will see early ​Bundesliga frontrunners Borussia Monchengladbach travel 70 miles east to face a Dortmund side who are struggling to reach the heights of last season.

At the moment, Monchengladbach just can’t stop winning and striker Alassane Plea can’t stop scoring. With four straight wins in the league, they sit top of the table on 16 points, one point clear of Wolfsburg.

If they are to make it five wins in a row though they’ll have to overcome a Dortmund side, who while not winning much, are not losing either, recording three straight 2-2 draws in a row. With both teams on fire in front of goal, it should be a really high-scoring game between two sides who love to entertain.

Sunday: Sassuolo vs Inter (Serie A) After a disappointing home defeat to Juventus in their last league game, which moved Juve above Inter and into top spot as well as ending Antonio Conte’s perfect start, Inter will need to show resilience and bounce back this weekend away at Sassuolo if they have real title ambitions.

With Alexis Sanchez out for three months, the pressure on Romelu Lukaku to deliver the goods in front of goal has cranked up a notch. However, Sunday’s opponents Sassuolo are languishing in 15th in ​Serie A and lost 4-1 against Atalanta in their last home game making this the perfect opportunity for Conte’s side to get back to winning ways and put the pressure on Juventus again. Manchester United vs Liverpool is undoubtably one of the biggest rivalries in English football and is therefore one of the greatest games of the Premier League season in terms of drama and entertainment.

Liverpool, who as previously mentioned are eight points clear at the top of the table, rock up to Old Trafford on a staggering 17 match winning run in the league – a run stretching back to March.

A late James Milner penalty against Leicester in their previous game maintained this record and means Jurgen Klopp’s side arrive in confident mood to face a United side who have been in turgid form this season, with manager Ole Gunnar Solskjaer potentially just a few poor results away from the sack.

With Paul Pogba and David de Gea both missing the clash for United, they could be blown away and embarrassed this weekend by their bitter rivals in their own back yard.

​Barcelona Calling? Neymar Hits Out at PSG and Reveals His Frustration at Their Decision
​Twitter Explodes as Erling Braut Haaland ‘Likes’ Donald Trump
5 Possible Destinations for Pep Guardiola if He Leaves Manchester City this Summer
Erling Haaland Creates History By Becoming Fastest Player To Score 10 Goals in UCL History
5 Players With the Most Man of the Match Awards in Europe's Top 5 Leagues This Season