​India saved their blushes and secured a 1-1 draw against Bangladesh in their 2022 FIFA World Cup qualifier at the Salt Lake stadium in Kolkata.

The away side took the lead in the 42nd minute after a blunder from Indian goalkeeper Gurpreet Singh Sandhu allowed Saad Uddin to head into an empty net. Adil Khan's header from a corner in the 88th minute helped the home side get back a point.

The Indian side started the match slowly and were almost made to pay for it immediately as Bangladesh could have had a penalty after just 20 seconds. Rahul Bheke was beaten for pace and tackled the Bangladeshi winger inside the box but was lucky to not have the foul awarded.

India have only themselves to blame. What an incredibly poor first half, and it's not just about the goal -- very one dimensional, complacent in the defence and not even one attacking move that can be spoken about. #IndianFootball #indvsban

Despite having the better team, the Blue Tigers relied heavily on long balls to try and breakdown a stoic Bangladesh defence as they looked aimlessly for Manvir Singh and Sunil Chhetri, but to no avail.

Against the run of play, the away side forced a couple of opportunities on the counter, as a bad mistake from Adil Khan allowed Biplu to go through on goal, but his shot was saved by Gurpreet. 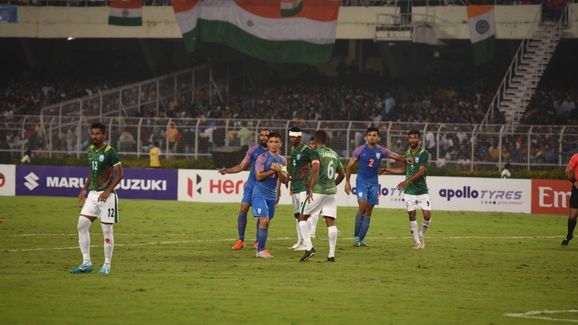 Right after that, Manvir went close as his header was saved onto the crossbar by Ashraful's fingertips in the Bangladesh goal.

However, that was the closest India went, as the away side then took the lead through Saad Uddin after Bheke conceded a needless free-kick. Gurpreet misjudged the flight of the ball and came off his line, leaving the Bangladesh man free to head into an empty goal.

India tried to push for an equaliser in the second half but it was the visitors who had the best opportunities to score. Jibon was denied by Sandhu after going through on goal while Ibrahim saw his cross-shot bounce off the crossbar.

India fight back from a goal down to salvage a draw against Bangladesh in #AsianQualifiers Group E! pic.twitter.com/sAgWsZfcOB

The hosts huffed and puffed for an equaliser but couldn't create any real chances. However, a corner in the 88th minute saw Adil Khan head the ball home and spare his team the embarrassment of losing at home to a much weaker opponent.

Sunil Chhetri had a chance to win the game for India but after beating a couple of defenders, he was unable to steer his shot into the goal. The draw means that India have two points after three fixtures, putting them in a very tough position in fourth place in the group. After impressing everyone with his play in India's 0-0 draw with Qatar, Gurpreet Singh Sandhu was mediocre against Bangladesh. His poor mistake led to the first goal of the game, and was completely unnecessary.

The Indian captain tried gamely but had very little opportunities and chances created to take advantage of.

An extremely average performance but he got the equaliser to save the points for the team.