On Tuesday evening, the world, as it is wont to do every couple of weeks, was abuzz with Cristiano Ronaldo GOAT bleating, after the Portuguese forward bagged four goals against Lithuania, taking his international tally to 93.

And by bleatings, I mean this:

 Cristiano Ronaldo has celebrated this fete by adding a fourth goal of the night against Lithuania. . . pic.twitter.com/YdotWh6z1D

You know the gist.

But this time though, it wasn't just GOATs that were profiting from Ronaldo's achievements with outrageous online proliferation. There was another entity, altogether more human, that was plastered across the tweets and headlines. That entity was Ali Daei.

And, like his namesake Muhammed, he remains the international GOAT for now.

Like most GOATs, both born (you know, a straight-up goat) and anointed (GOAT), Daei came from humble beginnings. Growing up in Ardabil, Iran, which is close to the Caspian sea and closer still to Azerbaijan, from a young age he was discouraged from playing football by his father during the academic year, forcing his mother into surreptitiously smuggling his kit to him every time he left for school.

This was seemingly not uncommon in the region, considering no one from Ardabil had ever played for the national team.

In spite of these rules and regs, his footballing education stayed very much in the family, with his first club side made up mostly of a variety of brothers, cousins and uncles. A place in the Adabil's All-Stars was earned, before a degree in - wait for it - Metallurgy at Tehran's University of Industrial Studies (since renamed the Sharif University of Technology for, well, obvious reasons) curtailed his progress.

When it comes to international football, there is only one true goat!  pic.twitter.com/s5SzVyTRZO

However, it wasn't long before the wielding gave way to more wizardry on the pitch, and a flurry of goals for Second Division side Taxirini - 14 in 20, to be exact, at least according to Wikipedia... - announced his name on the Iranian football stage.

A move to rivals Bank Tejarat was earned, where he notched 49 in 75 across four years, in the third of which his fateful call up to the national side occurred. And this is where the story really begins.

Sure, we could go on talking about his journey from the depths of Iranian football to the heights (Bayern Munich) and the mediocrities (Hertha Berlin) of the Bundesliga, but those somewhat inauspicious stints aren't why we remember Daei, and they certainly aren't why he's constantly compared to Cristiano Ronaldo.

Yes, he became the first Asian player to play in the Champions League at ​Bayern, but it's his goaltastic stint with the Team Melli (which means national team in Iranian, making it the greatest international nickname of all time) that cements his legacy in the culture writ large. 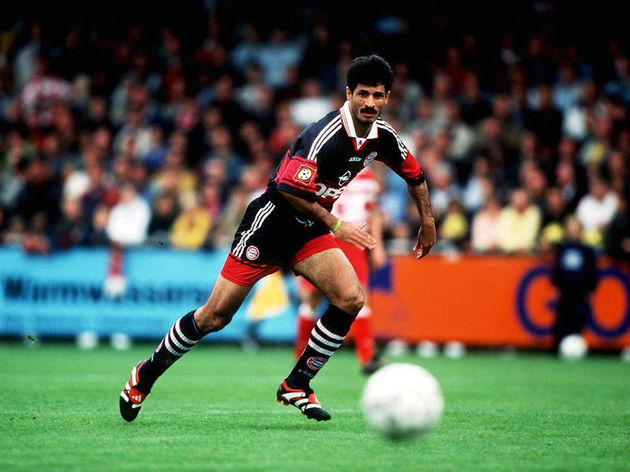 Such a record is, frankly, staggering, and it certainly came at a cost to his club career, with domestic seasons frequently interrupted by international fare.

But that was a price that, clearly, Daei was more than willing to pay, and one that now seems like a veritable bargain. Because, at the risk of instantly saying 'clearly' again, Ali was not a better footballer than Cristiano Ronaldo. According to Ottmar Hitzfeld, he was not even a better player than Alexander Zickler.

He was a bit ungainly, a bit awkward, stuck in a purgatory somewhere between a target man and a poacher. Indeed, it is rare to see an Ali Daei goal that you could honestly label a 'banger'. Sure, he was solid - as his metallic studies would suggest - and sometimes he hit the ball quite hard, but more often than not they stayed on the ground, and there was usually a trickling quality to their journeys to the net.

In fact, when there wasn't, it was probably because it was a header.

This is not to decry the great man. This is to contextualise his achievements. To say, once again with hopeful clarity, that he was not a generational footballer. Yet he remains the benchmark for the greatest footballers in the world, and comfortably at that.

And, while it's probably unfair to condense that international output into three moments - three crowning achievements - we're going to do it anyway, because your time is valuable, and there's only so much Daei content to go off.

The first came at the 1998 World Cup - Iran's first since 1978, and only the second in their entire history - when, after Daei's nine goals in 17 qualifiers had earned them their spot in the group stages, they were drawn alongside the USA.

It has since become known as the most politically charged game in World Cup history. This was not hyperbolic, and neither is it to say that Iran's ultimate 2-1 victory - their first ever in the competition - is the greatest result in the country's history. So yeah, a fitting highlight.

The second came in a lower profile clash against Lebanon in 2003, when he equalled Ferenc Puskas' longstanding international record of 84 goals. The third came the following year, when he notched his centenary goal in a four-score (!!!) showing against Laos. Talk about doing it in style. The bonus fourth - you're welcome - was his 109th and final goal for Iran, notched against Costa Rica in March 2006. His final gift to the international world. One last glint of light in the sunset of his career. A few months later, following a dismal 2006 World Cup campaign, the 36-year-old's sun had finally set.

But the glorious hues of a glorious career are still there for all to see, and until Ronaldo reaches that lucky number 110, he'll remain on the fringes of what is Daei's deserved limelight.