Close to two months have passed since then and no announcement has been made, suggesting that De Gea is still yet to formally ink those fresh terms on an extension that promised to keep him at Old Trafford for six more years and beyond his 34th birthday.

‘8 years of wearing this shirt with pride,’ De Gea tweeted back in August, a hint that the elusive announcement may have been imminent on the eve of the new season. It wasn’t, and, as more and more times passes, the speculation that it may never come is only growing.

8 years of wearing this shirt with pride  #mufc pic.twitter.com/qGjIOfHwNV

De Gea, the senior star who has captained United three times this season, is only under contract until the end of the season and the club has already triggered their usual 12-month extension. It means that foreign clubs can formally approach the player as of January ahead of a potential free transfer next summer – Juventus have already been linked.

It would be a huge blow for United, not least because it would mean losing a player for free when his quality and reputation could easily have commanded a world record fee for a goalkeeper in other circumstances – the current global high is £72m for De Gea's international teammate Kepa Arrizabalaga.

If indeed De Gea is considering not signing the new deal on table after all and looking for a fresh challenge elsewhere, United would need a replacement.

The usual big names have already hit the rumour mill – Atletico Madrid’s Jan Oblak is one who has been mentioned regularly for several years – but it may be that the answer for United lies closer to home, and not even current understudy Sergio Romero. Romero has been a fine servant for United ever since joining on a free transfer in 2015 and has always performed admirably in his 44 appearances. He would no doubt make a decent number one but United’s shift in long-term vision makes Dean Henderson the perfect candidate.

Young and British, Henderson fits the long-term vision United have been trying to implement since Ole Gunnar Solskjaer was appointed on a permanent basis six months ago. He has been at the club since the age of 14 and has had to fight for every inch over the last four years.

Henderson dropped all the way down to the National League North, English football’s sixth tier, to get his first chance in senior football at the age of 18, spending the latter half of the 2015/16 campaign on loan at local non-league club Stockport County.

The former England junior stopper has played at a higher level every year without fail since then, rising up the league ladder with Grimsby (League Two) and Shrewsbury (League One), before making his name nationally with a breakthrough Championship season with Sheffield United. 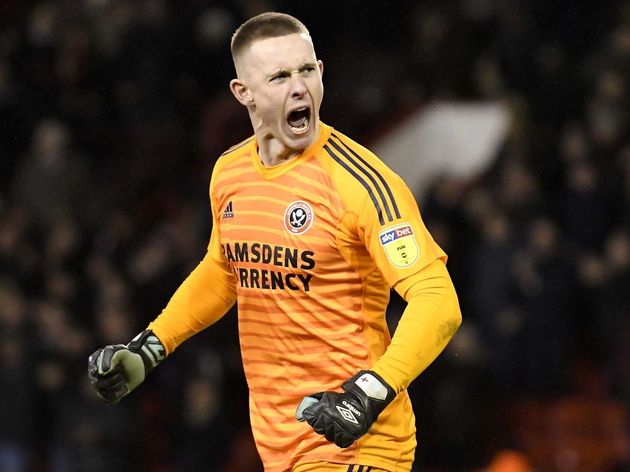 Henderson played every game as the Blades secured promotion to the Premier League. He was also named the club’s Young Player of the Year and won the Championship’s Golden Glove.

The player returned to Sheffield on loan this summer and has already made an impressive start to his first-ever season of top-flight football. His most recent outing in a 2-2 draw against Chelsea saw a superb save at a crucial moment that directly contributed to the Blades securing a point.

Henderson’s second-half save to deny Tammy Abraham stopped Chelsea from going 3-1 up after Sheffield United had halved a 2-0 deficit to get back into the game. He showed sharp reflexes to get down and reach the close-range effort, as well as awareness and a strong wrist to very deliberately turn the ball away from the immediate danger area inside the six-yard box.

The save was arguably even better because it displayed Henderson’s mental strength and focus after his marginal hesitancy had helped Chelsea score their first goal earlier in the game.

By next summer, Henderson will be 23 years of age and will have 150 senior games to his name. He could potentially also have even been called up by England if his current form continues, with goalkeeping places in the national team very much up for grabs.

He would therefore not be an unknown gamble in the uncertain event that De Gea really does leave and he finds himself with an ultra-rare opportunity as a homegrown United goalkeeper.

Gary Walsh made sporadic appearances in the 1990s as a deputy to Peter Schmeichel, but United haven’t had ‘one of their own’ as a regular starter between the sticks since David Gaskell was competing with Harry Gregg (pictured below)for the gloves in the early 1960s. It was 1951 and Reg Allen the last time a home-grown United goalkeeper enjoyed undisputed number one status.