​A student failed in his French exam by a single mark after he answered Cristiano Ronaldo below the question with a photo of a goat.

15-year-old Ahmed Nabil was asked questions regarding various animals and while it looked like he would have gone ahead and answered it right, he chose to put in the ​Juventus hitman's name as his answer.

"It was a French exam I did two years ago." he told ​SPORTbible.

He continued, "For me personally, it was a very hard test and one of the sections was: write the meaning of every animal we show you but in french. I couldn't remember what a goat was called in french, so I thought I'd do something creative and make a couple of my mates laugh instead of just leaving it empty."

What about these answers on this lads French test...👏🏻🇫🇷😂

Speaking about his opinion on who he thinks is the greatest of all time between ​Barcelona legend ​Messi and Portuguese great Ronaldo, Nabil said, "If anyone asks me who I think is the goat is, I'll tell him them Ronaldo but deep down I'm not that sure. Sometimes I think that Messi is better but because of my bias, the former United player is the greatest."

In the exact same exam, Nabil also mentioned ​Arsenal midfielder Mesut Ozil in his answers. He said as he concluded, "The other blank box was a mistake by the teacher, so I thought I'd continue my "football themed" answer and write Ozil. When the teacher finally gave me the exam she literally had no reaction. I don't think she even knew who Ronaldo and Ozil was, so she didn't tell me anything afterwards." 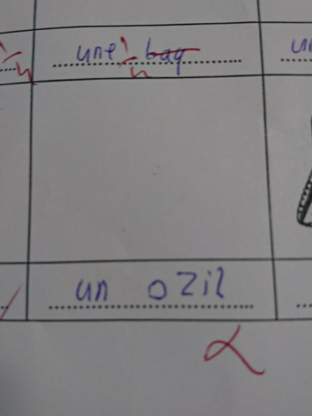