Famed data analysts ​fivethirtyeight.com have once again worked their statistical magic and have come up with the most logical final ​Premier League table by the end of the 2019/20 season.

On using the forecasting tools available to them for the current season, the website believes there is a 61% chance that ​Manchester City will ​retain the Premier League title this season too while last season's runners up ​Liverpool boast a probability of just 27%.

​Tottenham Hotspur occupy the third spot with ​Chelsea in fourth ahead of ​Manchester United and ​Arsenal in fifth and sixth respectively. 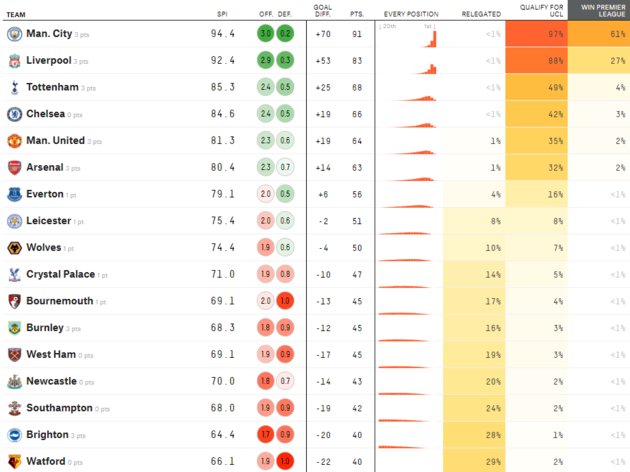 The three teams below Watford who have been predicted to be relegated this season are the three newly promoted clubs, Aston Villa, Norwich City and Sheffield United.

The website uses its unique algorithms which brings into perspective a variety a situations and categories for all 20 clubs, which in-turn ends up deciding the predicted table. Additionally, their algorithm consists of statistical assistance from the likes of Squawka, Opta and Google.

These ratings, in turn, produce an overall SPI rating, which represents the percentage of available points. A win is worth 3 points, a tie worth 1 point, and a loss worth 0 points - the team would be expected to take if that match were played over and over again.