​At the risk of sounding like a broken record, it has been another pretty dismal week if you are a Newcastle fan. The team were hammered 4-0 in their opening pre-season game against Wolves, just hours after appointing Steve Bruce as manager. That decision went down like the Titanic with the supporters.

The question that most people wanted answered: how was Bruce Newcastle's first choice for the job?

Well, it turns out he wasn't. Not even in the top ten

All this allows the imagination to run wild. Who were the ten people ahead of him in the pecking order? Well most reports suggest it was names as varied as Jose Mourinho and Sean Dyche. However, knowing Big Ashley's preference for cheap and not necessarily cheerful, here's an alternative list of names on the long list... Let's throw Curbishley in the mix straight away. He has not managed since 2008, and never really even looked that likely to make a return.

That does not stop the bookmakers though, no sir. Whenever there is a managerial vacancy, Curbishley's name will always appear on the list of possible candidates. Over a decade out of the game, but the bookmakers don't care. They haven't forgotten his mid-table finishes with Charlton. If Curbishley's name wasn't on the shortlist, it is a travesty. 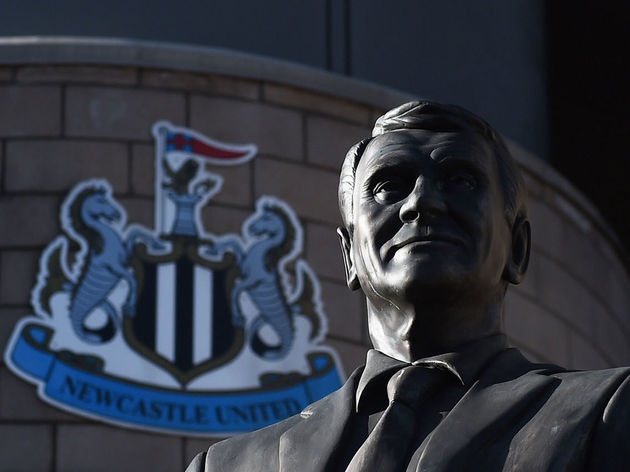 Which has more charisma: the Sir Bobby Robson statue or Steve Bruce? A tough question, but you're probably edging towards the former.

Those were the good old days, playing under Sir Bobby. Sure Newcastle didn't win anything then either, but that didn't matter. They were brilliant to watch. Nolberto Solano and Laurent Robert jinking down the wings, Alan Shearer scoring goals for fun. Even Craig Bellamy wasn't completely hated in that side.

The statue that sits outside St James' Park shows Sir Bobby smiling, and just that warmth would send the side on to the pitch in good spirits. He was actually reasonably popular with the Newcastle fans at one point, being part of the side that were promoted at the first time of asking after being relegated with the club in 2008/09. He then moved on to bigger and better things with (checks notes) QPR

Still, he turned a bottom half club into a mid-table one last season, something that Steve Bruce also did at Sheffield Wednesday. Logic dictates that the Twitter philosopher must have been in the running as well. ​ The club desperately need the feel-good factor to return. Look no further than Shola and Sammy Ameobi.

Shola played for 14 years at Newcastle. He was hardly ever prolific, but he gave his all and was very popular with the fans. Most importantly, he loved facing Sunderland. Seven goals in 16 Tyne-Wear derbies made him a Geordie hero. A name that makes the blood of every Newcastle fan boil just that little bit more. Kinnear was just hopeless and very sweary, hardly endearing himself to the Geordie faithful.

Taking over from Kevin Keegan back in 2008, he was despised by the fans, turning the team into a laughing stock whilst forgetting some of the player's names. If Mike Ashley really wanted to wind up the Newcastle fans - as if he hasn't done so already - Kinnear's name will have been put down for consideration. Bruce has been relegated from the Premier League

Warnock is a specialist in taking a not very good group of players, putting them out on the pitch, and allowing them to prove that they are not very good.

Given the fact that Newcastle seem to be intent on letting their best players leave, Neil might have been just the man for another lacklustre relegation battle.​

Like Bruce, Pearce has (somehow) got a number of high-profile jobs during his career. He was Manchester City

He also led the England Under-21s for six years, although that now seems like a masterstroke compared to Aidy Boothroyd.

So he is used to getting roles that he should not have even been in the running for. Remind you of anyone? These two would whip the team in to shape. If the squad under-performed, ​the players would face a Bushtucker Trial to earn their money. Now how badly do you want to beat Burnley on Tuesday night?

Of course, there is one problem. Due to the fixture list, the duo may have to give up Ant & Dec's Saturday Night Takeaway. A tragic loss, but those are the kind of sacrifices you have to make if you want to be the Newcastle The Chelsea legend is also adored on Tyneside. Sorry, not adored, despised - ​Newcastle fans despise him.

Wise held the position of executive director at Newcastle back in 2008 for over seven months. To confirm, it took over seven months until it was realised that he did not have a clue what he was doing.

That doesn't matter though. Newcastle have had a series of managers over the years who were pretty clueless - they still got the job. Wise has his connections with Mike Ashley, so he may have been considered for the role so that they could share the wrath of the Newcastle fans between them. Why not cut out the middle man? Ashley has been running the club since 2007 and has overseen two Premier League relegations. What a record.

After all, we all love to be battling relegation every year and don't forget the early exits from the cup competitions so that we can fully focus on that miserable relegation scrap. Said no one ever.

Ashley does not seem to care how hated he is by the fans. He must have thought about giving himself the job just to annoy them even more.