India put in a much improved performance in their third and final Intercontinental Cup clash against Syria as they fought to secure a 1-1 draw.

​The Blue Tigers took the lead in the 52nd minute through a header from centre-back Narender Gahlot. They had to settle for a draw, however, after substitute Jerry Lalrinzuala needlessly fouled Ahmad Alahmad to concede a penalty that was calmly converted by Firas al Khatib.

The first half saw both teams struggle to create many clearcut opportunities as most of the game was played in midfield. The home side's best chance came when they went wide, as Udanta Singh's cross almost found Lallianzuala Chhangte right in front of goal.

2⃣nd- HALF KICK-OFF ⚽️ Can the #BlueTigers find the elusive W in the #HeroIC in the next 45 minutes?

Soon after, Chhangte was played through by Rahul Bheke but saw his shot saved by Alma even as the offside flag went up.

The Assyrians had trouble creating chances themselves but had Al Khatib to thank for whatever positive they did as he brought down a long ball beautifully before putting his effort wide after Gahlot was caught out.

The second half saw Igor Stimac's men come out with great intent and their effort was rewarded with the goal as Gahlot latched onto Anirudh Thapa's lovely corner to power the ball home.

📽️ @NarenderGahlot rose above everyone else and beautifully nodded in the header to put India in front! 🤩🤩

Despite taking the lead, the home side did not fall back into a shell and looked ready to counter and score the all-important second goal to kill the game.

However, the substitution of Mandar Rao Dessai saw Jerry come in and that changed the complexion of the game. His poor tackle saw the away side awarded a penalty in the 78th minute and Al Khatib made no mistake from the spot.

Lalrinzuala was again at fault soon after and could have given away another penalty as he tugged on Al Khatib's jersey in the box and should have been penalised. However, the referee waved play on and spared Jerry's blushes.

Syria had a couple of late chances, with Firas at the centre of the action. His free-kick was palmed over the crossbar by Gurpreet Singh Sandhu and in the last minute of added time, he was able to fashion a cross that almost fell for Alshami.

India ended their campaign in the Intercontinental Cup with one point after picking up two losses and one draw from their three matches. This result meant that Syria could not make the final as DPR Korea will now face Tajikistan in the summit clash.

Thank You, Ahmedabad 🙏! We will be back, STRONGER! 💪#HeroIC 🏆 #BackTheBlue 💙 #BlueTigers🐯 pic.twitter.com/iAfE0XWeVl

Among the Indian players, we look at the ones who performed the best against Syria:

The best player on the pitch for India as he protected the defence very well. Was not afraid to put in tackles and used his wiry frame and tenacity to good effect as he broke down attacks with his pressure and smart fouling. 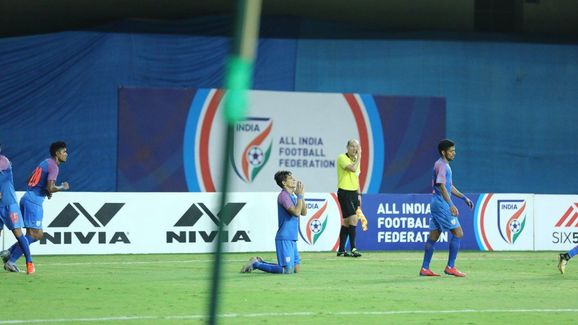 The 18-year-old central defender was playing only his second ever match for India but showed signs of maturity and composure. He made less mistakes than in his first game and though he was responsible for Syria's clearest chance in the first half, he had a great second half. Gahlot made crucial interceptions and won headers, and scored his first goal for the country.