In the modern commercialised game of burgeoning finances and demanding directors, football has no time for sentiment. You either thrive or you stall. There is no other city in the UK that exemplifies this macabre mantra more than Sheffield.

The Steel City has more than played its part in establishing the sturdy foundations for what would become a global movement, transcending sport itself. Yet the game has not just left the city behind, it has left its once proud football clubs gasping for air in choppy waters.

With Sheffield United defying the odds and securing a season back in the big time, can football enjoy a rebirth in the city that did so much for the game we have all come to love?

Sheffield truly is a city of football firsts. The first and oldest football club world football, Sheffield FC, was established there in 1857. Two years later a couple of quintessential Victorian gents from the Steel City, Sir Nathanial Creswick and William Prest, penned their first draft of rules for the game.

The first-ever derby match was contested in between Sheffield FC and newly found rivals Hallam FC. Those pesky newcomers would also go on to win football’s first knockout tournament in 1867.

Since Sheffield Wednesday suffered relegation from the top flight in 2000, the city has enjoyed just one season of representation in the Premier League.

As recently as the 2011/12 season both of the city’s league clubs found themselves in the third tier and practically penniless. 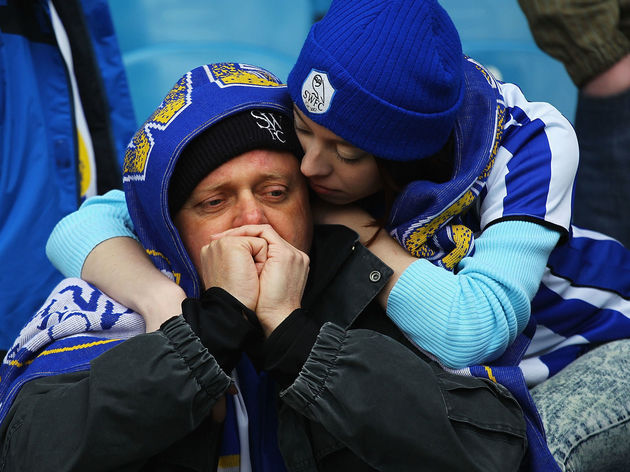 After clocking up an eye-watering amount of debt, Sheffield Wednesday never quite recovered from the economic shock of life outside the top flight.

In a painful series of winding-up petitions in 2010, it emerged that the Owls still somehow had had debtors dating back as far as 1989 who, understandably, wanted their money.

Similarly, Sheffield United were dumped out of the Championship in 2011, with a spiralling wage bill that had been exacerbated by their parachute payments drying up. A succession of new managers and owners was paraded at both clubs as professional football in Sheffield sank to its nadir on and off the pitch.

Guided by boyhood Blades supporter and former player Chris Wilder, Sheffield United have elbowed their way out of mediocrity and into the big time.

Wilder has cultivated a togetherness and belief in his squad that may compensate for a lack of a bonafide Premier League quality - excluding re-signed Phil Jagielka, of course.

What a feeling to get the opportunity to wear the Red and White stripes again at Bramall Lane #SUFC #Blades ⚪⚫ pic.twitter.com/Z91k7u7GET

Sheffield United's hierarchy can expect a similar boost to the club's coffers this season. The global exposure to life in the top flight will also help raise the profile of football in the city. Over 200 countries tune in to watch the best of the action in the division each year.

The status of belonging to an elite clubhouse brings with it all manner of investment potential from the money-men of the game. Sheffield United are suddenly, a wee bit more in vogue. Whether Sheffield United’s promotion can reverse the pattern of decline remains to be seen. However, for a minimum of nine months, Bramall Lane will be back on the football map once again which should act as a huge shot in the arm for the football-mad city.

If both clubs can heal their institutional malaise, then they can help take football in the Steel City to a much happier place.

The ingredients are there. Sheffield United had an average 26,175 fans through their gates last season. At Hillsborough, that figure was 24,429. These numbers are better than six current Premier League sides.

Even after two decades of loyalty testing decline, the city still has more than a taste for the beautiful game. There is also clearly an outside interest in the restoring the city to its former glory. In the past decade alone, M

It is clear that the brakes have been firmly applied on the very worst of the trouble that has afflicted both clubs over the past two decades.

Sheffield United have enjoyed two promotions in three seasons, whilst The Owls have twice made the Championship playoffs in recent years. With positive press previously evading the city's teams like the plague; this recent success does offer some hope that the city's proud clubs can make a long-awaited return to the big time.

As recently as 1993, Sheffield Wednesday were a top eight side and had made two finals in one season, whilst The Blades sat in mid-table comfort during the Premier League's maiden season. It will take a seismic shift for anything like that level of success to return to the city in the immediate future, but for now, a slither of light has cut through the gloom of recent years.

At least in one half of the city, fans can look forward to a new season with renewed optimism.