After months of speculation, Borussia Dortmund have officially secured the signing of

He Comes From a Footballing Family At this point, it should have been drilled home that Thorgan Hazard is the younger brother of Eden, and most of you will even know that the two most famous brothers have another sibling who is a professional footballer, Kylian.

But what most fans might not know is that their footballing gene actually comes from their parents.

Hazard's father, Thierry, played mostly at a semi-professional level in the Belgian second tier with Louviéroise, but as he was a defensive midfielder it was actually their mother that passed down the most knowledge to the three pros.

As an attacking player in the Women's First Division,

He Has an Annual Goalscoring Bet With Eden Hazard A bit of sibling rivalry never hurt anyone. Between Thorgan and Eden, there's an annual incentive not to finish as the lowest scoring brother, which has already been going for a number of years.

But family dinners could soon get a lot more expensive, as the new Borussia Dortmund star explained how their younger brother 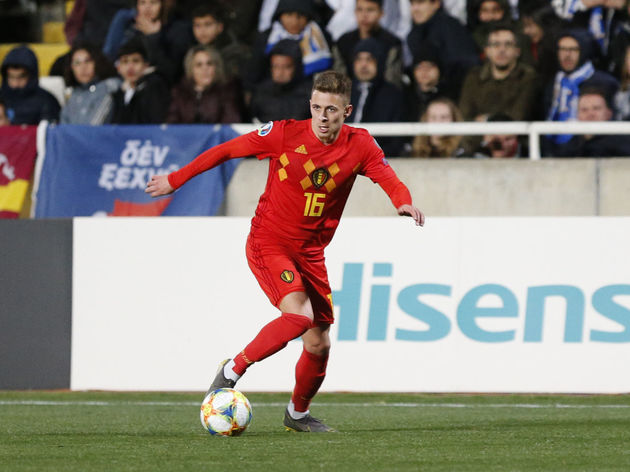 Despite breaking into the national team at 20, Hazard has had to be patient for his chances with Belgium.

But the Bundesliga star has actually been part of every single matchday squad since October 10, 2016, which is a longer run starting on the pitch or off the bench that Eden, Kevin De Bruyne - who hasn't featured since the World Cup - and Romelu Lukaku.

He Can Play in Multiple Positions During Chelsea's pre-Maurizio Sarri days it was always very clear where Eden Hazard would be playing every week, but at Gladbach, Thorgan often found himself switching positions every week and he hasn't left fans disappointed in a single one.

During his time as manager at Gladbach, Lucien Favre's system of playing the creative Lars Stindl or Raffael through the middle at times saw Hazard drafted in for cover, and during his career at the club Following in the footsteps of older brother Eden, the odds were always going to be stacked against Thorgan while he tried to make a name for himself in European football.

Fortunately, however, he didn't have to.

Rating the Top Football Transfer News/Rumours of the Day – 18/1/2020January Transfer Window: All the Official Deals Done in the Premier League so Far​Patrick Vieira Reveals Why It Was Not Possible for to Work With Mario Balotelli at Nice

UEFA Reportedly Rigged the Team of the Year To Include Cristiano Ronaldo Ahead of N'Golo Kante
Lewandowski - Gnabry Europe's Most Lethal Strike Duo; Messi - Suarez in Sixth
​The Wage Bill of the Top 20 Clubs in Europe Revealed
​Jadon Sancho Criticised by German Media for Buying £268 Gold-Covered Steak
Ins and Out: The Players That Real Madrid Should Buy and Sell in the Summer