​Derby County host Leeds United on Saturday evening, as the two clubs contest the first leg of their Championship play-off semi-final; where they will look to book their place at Wembley for the final.

Derby secured their spot in the play-off places on the final day of the season when their 3-1 victory at home to West Brom was enough to see off the competition from Middlesbrough and Bristol City in the race for the top six. Leeds, on the other hand, have had a bit more time to prepare for the play offs, as a string of poor results in their final few games saw them concede their automatic promotion spot to Sheffield United. Despite sitting in the top two for much of the season, the Yorkshire club have had to settle for a place in the play-offs.

The meeting of these two sides earlier in the season sparked the infamous 'spygate' debacle, after which Derby boss Frank Lampard reported Leeds to the Football League for snooping on his team's training sessions in the lead up to the fixture.

Meeting now for the first time since that fallout, this is sure to be a feisty affair.

Check out 90min's preview of the game below:

After putting the Rams ahead on the final day, striker Martyn Waghorn was forced off through injury. The substitution appeared to be more of a precautionary one​, but the forward's fitness will be monitored on a day-today basis in the lead up to this game.

Elsewhere, Duane Holmes and Richard Keogh both passed late fitness tests to play in ​Derby's victory over ​West Brom but were thought not to be 100%. The pair are expected be available for Saturday, but their fitness will be watched closely. Lastly, Tom Lawrence has escaped a ban for an alleged dive in his last game and will therefore be available for the game. One player who didn't escape a ban for simulation is ​Leeds' Patrick Bamford. After feigning injury to get ​Aston Villa's Anwar El Ghazi sent off, the former ​Chelsea striker was handed a two-match ban - the second of which will be served for the first leg of this tie.

Another crushing blow for Leeds came following their defeat to ​Brentford when star man Ezgjan Alioski was ruled out for the remainder of the season with a torn meniscus.

​The aforementioned 'spygate' fixture in January ended 2-0 to Leeds at Elland Road with goals from Kemar Roofe and Jack Harrison. The Whites were also victorious when the two sides met at the start of the season, with Marcelo Bielsa's side running out 4-1 winners.

Derby and Leeds have played in the same division so often in recent years that they have met 29 times since the turn of the century. The Rams boast the better record since 2000, having won 14 compared to the Whites' nine - however, this does include an incredible ten game winning streak for Derby between 2006 to 2013. Derby's most recent trip to the play-offs ended in semi-final defeat to ​Hull City, as the Rams lost 3-2 on aggregate to the team who would go on to win the final. Leeds, on the other hand, are featuring in their first ​Championship play-off campaign since 2006 when they were beaten 3-0 by Watford in the final.

The reason Derby have made the play-offs is courtesy of the late run of form they put together, which saw them win four and draw two of their final six games. Prior to that, the Rams had won just two out of their previous ten.

The form of Leeds could not look more different. They went into a home fixture with relegation-threatened ​Wigan knowing that a win would put them three points clear of third place ​Sheffield Utd. ​However, Bielsa's men fell to a 2-1 defeat to the 10-man Latics, which initiated their terrible end to the season. 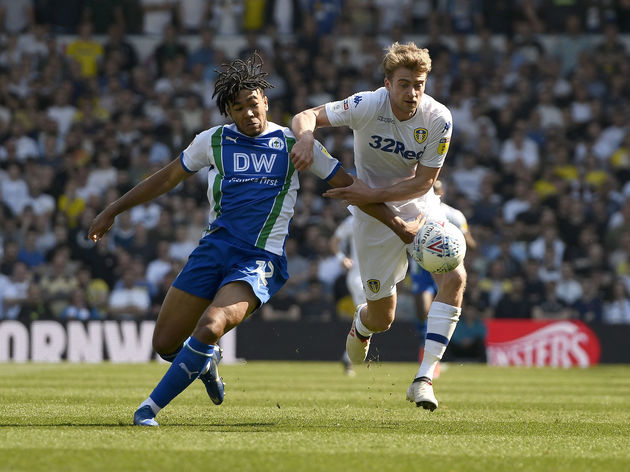 The Peacocks followed that result with two more defeats and a draw in their final three games, meaning the away side enter this fixture in woeful form.

Here is how the two sides have fared in their previous five fixtures:

Owing to recent results, Derby go into this two-legged fixture with all the momentum in their favour and will be looking to make their home advantage count on Saturday evening.

That said, despite recent form, Leeds did finish three places and nine points ahead of their opponents and have their own reasons to be optimistic of getting to Wembley. As is the case with many first-leg affairs, this game is going to be tense and neither side will want to give anything away. However, Derby's momentum may just give them the edge on Saturday.