​Mohun Bagan officials are set to participate in a meeting in a five-star hotel in Kolkata to discuss investors today. 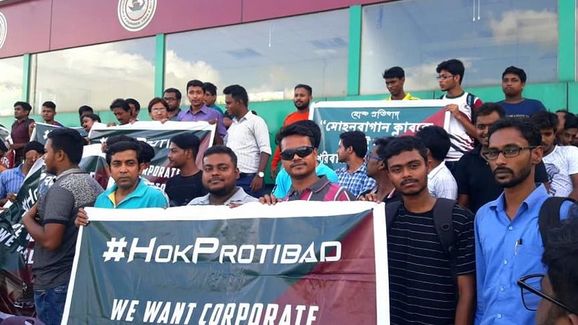 For a long time now, Mohun Bagan supporters have been demanding corporatization of the club. While the club officials have claimed from time to time that they have options to choose for sponsorship, the fans have accused the club of faking it all for political gimmick. The lack of sponsors has caused a scarcity of funds at the club.

The inability to invest has been a prime reason why the club has not been able to win the I-league title for the last two seasons.

Mohun Bagan have been left without a primary sponsor since their termination of contract with McDowell...https://t.co/8kEgfhWAwK

With the arrival of Quess Corp Private Limited, East Bengal have intensified their efforts to join the Indian Super League bandwagon, and this has set alarm bells ringing at Mohun Bagan.

On Sunday, fans assembled at the club tent to stage a huge protest.

Chelsea Could Move Ahead of Liverpool in the Race for Timo Werner With Antonio Rudiger Being the Key FactorAchraf Hakimi's Agent Reveals His Client's Aim is to Play for the Best Club in the World, Real MadridJuventus Reportedly Keen on Signing Chelsea Star and It's Not Jorginho

3 Indian Players to Watch Out for in the 2019-20 Season of the Hero I-League
Top 5 Moments of Indian Football in 2018
Mohun Bagan Reportedly Ready to Announce New Sponsor by Next Week
Exclusive: From Underdogs to Champions, the Story of Ranjit Bajaj's Minerva Punjab
Indian Football Trials - Week 2 Updates